How to Play Sudoku

Sudoku remains one of the world’s most popular puzzle games. It is fun, challenging, and extremely addictive! The best part is, Sudoku can be played by people of all ages. All you need is a pencil and a Sudoku puzzle to get started. There are also some great websites which allow you to play Sudoku online.

If you are interested in trying Sudoku for the first time, you have reached the right place. This guide will explain everything you need to know about Sudoku including its history and rules. We'll also share several advanced Sudoku solving strategies.

Sudoku (数独 sūdoku) is an extremely popular number-placement puzzle game. The modern version of Sudoku was invented by Howard Garns, a retired architect from Connersville, Indiana. The first Sudoku puzzle to be published appeared in Dell Magazines in 1979 under the name ‘Number Place’. A Sudoku puzzle was published by Nikoli in April 1984 as Sūji wa dokushin ni kagiru (数字は独身に限る), which is translated as "the digits must be single”. The name of the puzzle was later abbreviated to Sudoku (数独) by Maki Kaji, the president of Nikoli Co. Over the next few years, Sudoku exploded in popularity in Japan and several variants were developed. In 1997, a Hong Kong judge named Wayne Gould was exposed to Sudoku and created a computer program to rapidly produce new puzzles. He then promoted Sudoku to The Times in Britain, which published a puzzle in November, 2004 under the name ‘Su Doku’.The puzzle was an instant hit. A reader even wrote a letter to The Times, telling them that his fixation on it caused him to miss his train stop. Sudoku quickly spread to other newspapers in the UK. In 2005, The Times was including an easy and a hard Sudoku game in every newspaper, to give super keen puzzle solvers a greater challenge. Sudoku began making its way into American papers around this time and it began to boom in popularity in the USA as well.

The Rules Of Sudoku

Sudoku is played on a 9 x 9 grid that contains nine 3 x 3 sub-grids. The sub-grids are usually referred to as ‘blocks’ and are outlined with bolded lines. The initial grid will contain several numbers, which act as clues for solving the puzzle. Here is what a typical beginner’s Sudoku puzzle looks like: 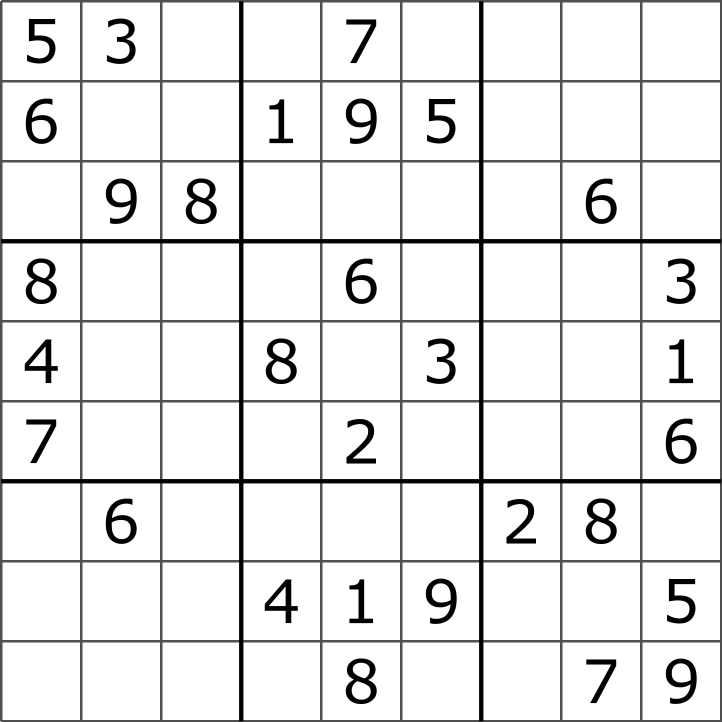 The objective of the puzzle is to complete the grid, so each of the rows, columns, and 3 x 3 sub-grids contains the numbers 1 to 9. The challenging part of the puzzle is that each number can only appear once per row, column, or sub-grid. Here is what that puzzle will look like once it has been completed (note that there each number is unique per row/column/sub-grid). 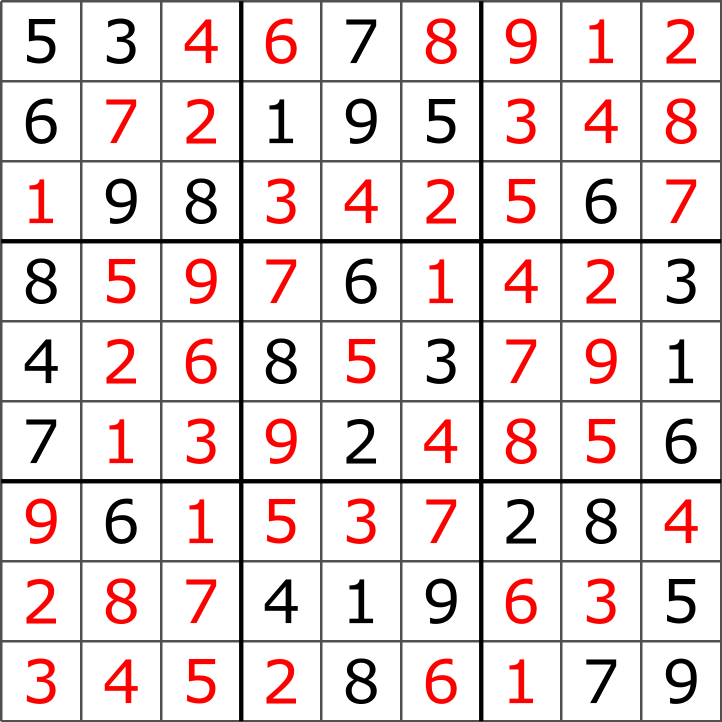 Although the rules of Sudoku are very simple, solving puzzles can require complicated logic and a variety of solving strategies.

Several strategies have been developed for solving Sudoku puzzles. Each one will help you solve Sudokus more easily and give you a chance of tackling the hardest puzzles.

This is the most basic solving strategy for Sudoku as it comes straight from the puzzle’s rules. This rule states that there can never be a duplicate digit in a row, column, or block. We can use the rule of 1 to find an answer for the box with the cursor in it in the puzzle below (top right block). See if you can figure it out (hint: look at the other numbers in the column and row which align with the block). 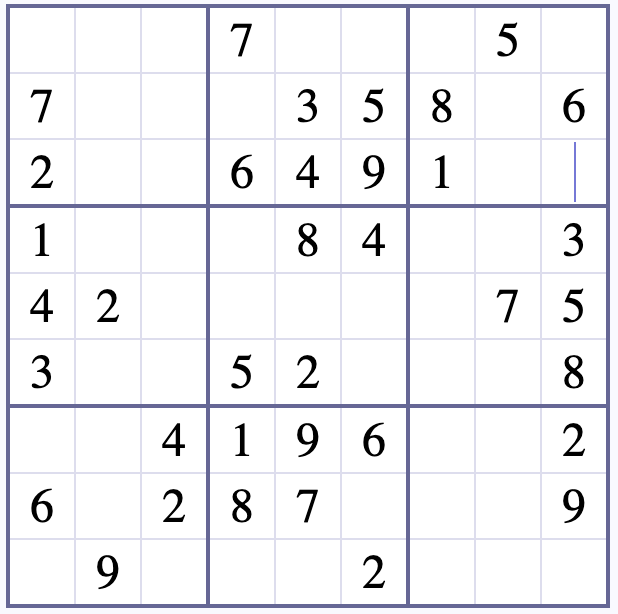 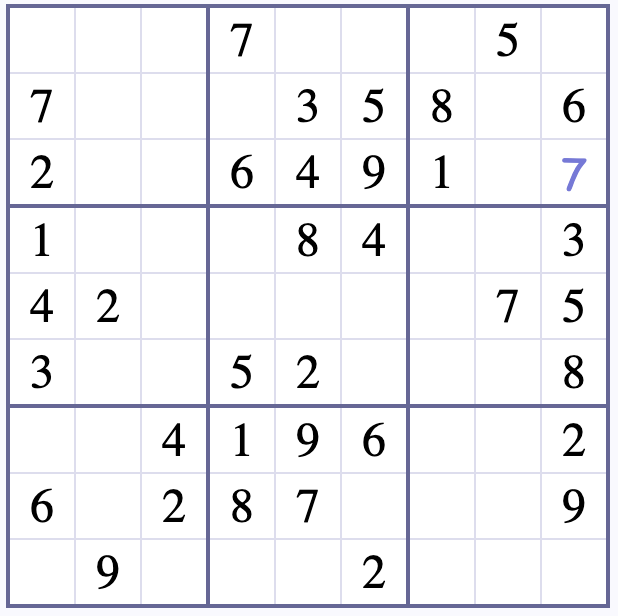 This rule can be applied to blocks, rows, and columns. Each of these regions must include the digits 1 to 9. So if you see a clock, row, or column that is almost full, you can easily guess what the remaining boxes should be. Let’s take another look at our puzzle. Look at the right hand column, as it has almost all of its numbers filled in. What could the top right and bottom right boxes be? 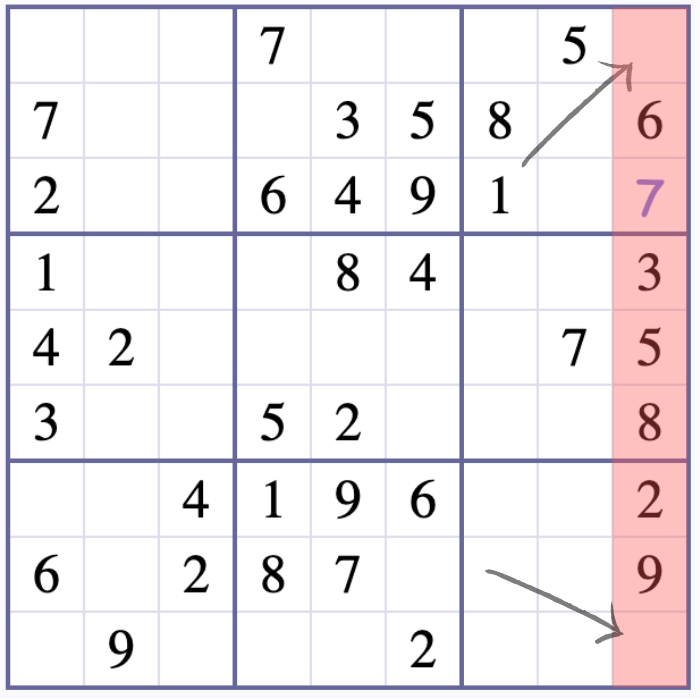 The rule of necessity tells us those squares must contain a 1 and a 4, as they are the only numbers missing from 1 to 9. But which one goes in the top and which goes in the bottom? You can use The Rule of 1 to figure that out. Because the top right block already has a 1 in it, it means that another 1 cannot be added to that region. So, it must be 4 in the top right and 1 in the bottom right, like so: 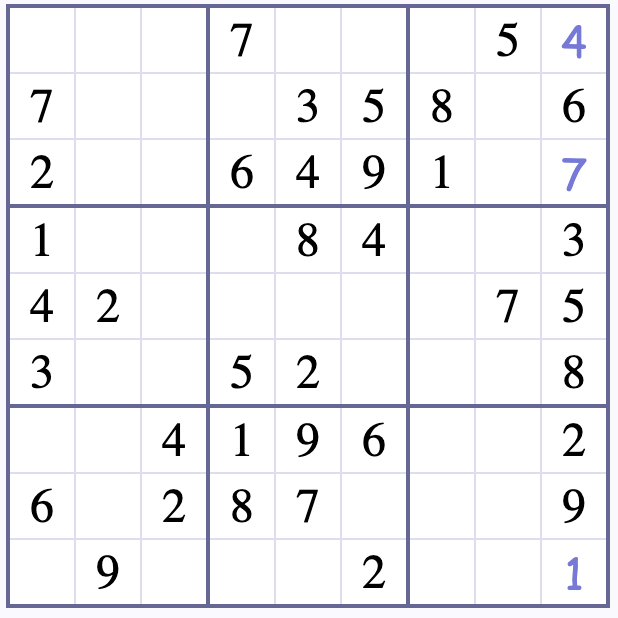 The Rule of 1 is very useful for eliminating numbers from blocks. Let’s take a look at the block with the cursor in it (Top middle block). 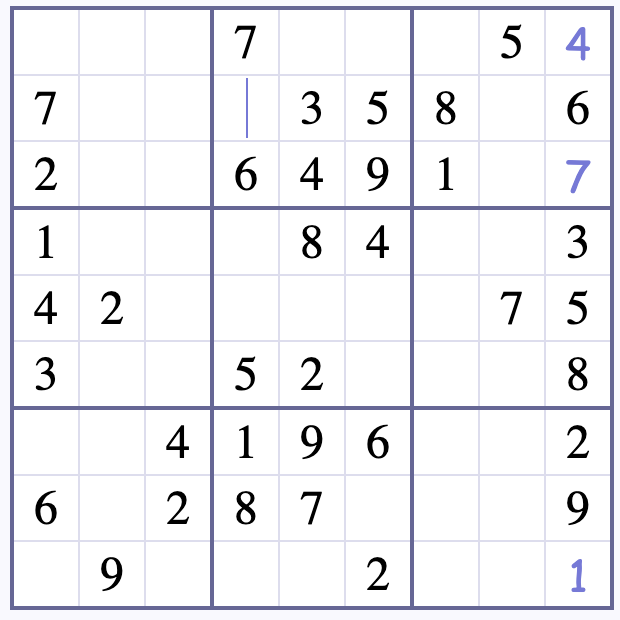 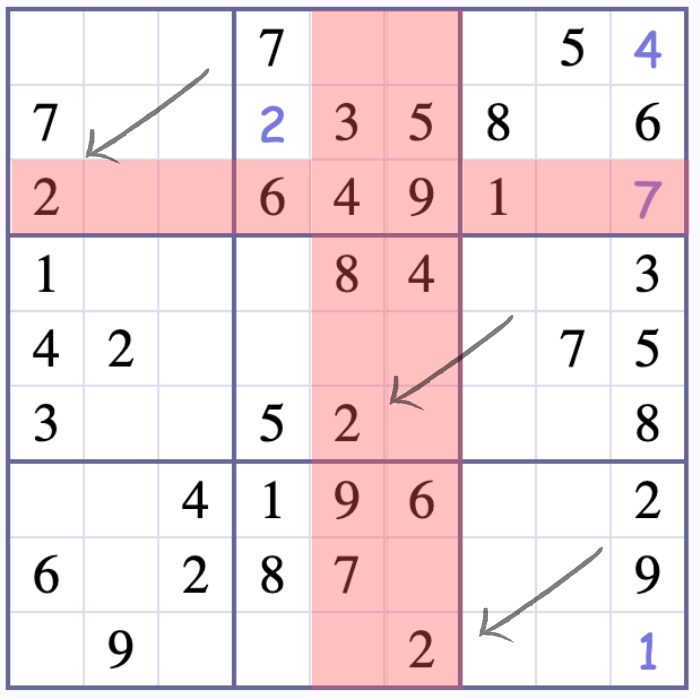 This type of elimination process will come in very handy on more difficult puzzles.

There are several techniques for removing candidates from squares. These allow you to narrow down the possibilities for a square and are very useful for more complex puzzles.  They include:

This method will help you eliminate a specific number from a group of cells. One easy way to use it is to look for blocks with corners filled in. In the example below, the middle block has a number in each corner. The presence of the 1 in the top block means that there must be a 1 in the middle square in either of the green boxes. This has a flow on effect, eliminating the possibility of a 1 being in that row on the left and right blocks. This is useful information that will help you continue solving the puzzle. 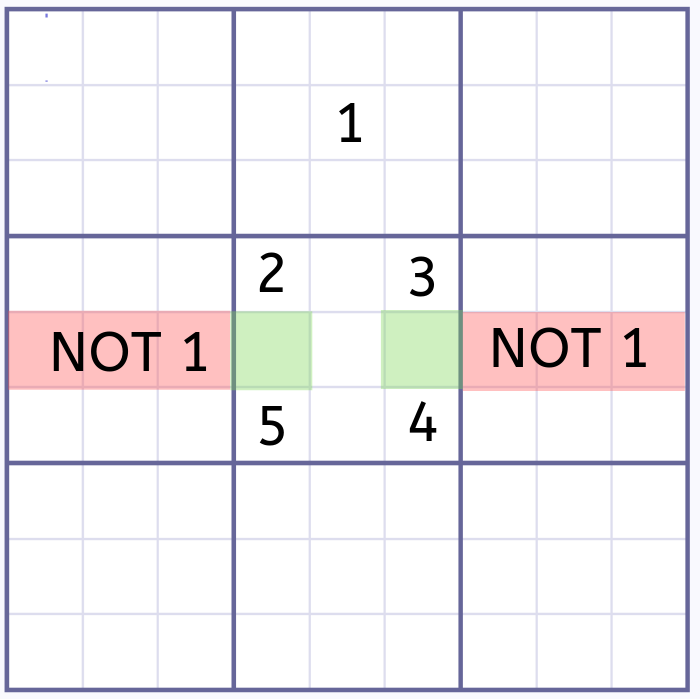 This technique is useful for eliminating a specific number from rows within a block. It uses a similar concept to the previous example. If you take a look at the example below, you will see that the position of the 1’s eliminates the possibility of their presence in the left/right column in the middle blocks. This means that the 1 must go in one of the green squares, which eliminates the possibility of a 1 being in those squares in the right block. Once again, this technique can be used to help you solve very challenging puzzles. 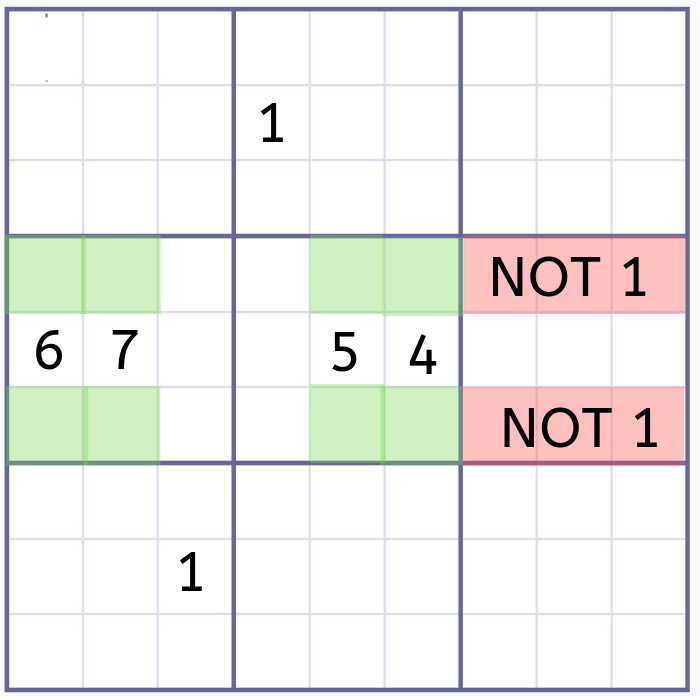 This is a more advanced strategy that involves looking at the known candidates for a square. Let’s say you have a column or row where several squares could have a one or a seven. If there are two squares that only have a 1 and 7 possible in that column or row, then the other squares cannot have a 1 or 7. If you take a look at the example below, the squares that only have 1 and 7 as a possibility are highlighted in green. Because they must contain 1 or 7, it eliminates those numbers as candidates from the other squares. These kinds of pairs are called ‘naked’ because they are so easy to see. 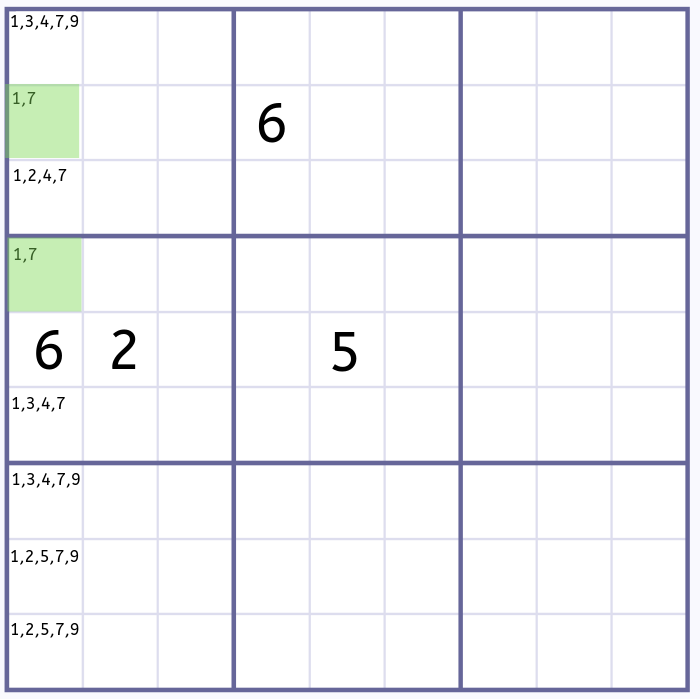 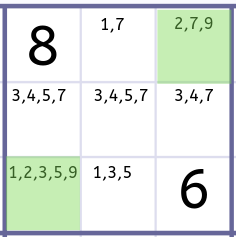